A compilation of some of the new eateries in Ipoh, a special feature for those jaded palates (Read : those who had grown bored of the same old … same old … offerings). 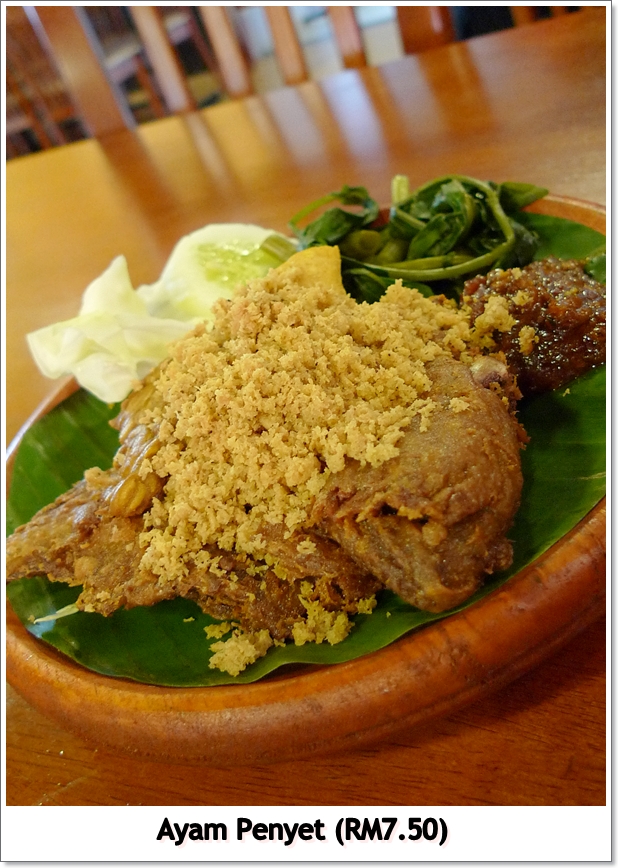 The only time I have tried Ayam Penyet in Malaysia was my Waroeng Penyet experience at The Curve sometime ago. Ayam Penyet literally translate to ‘Flattened Chicken’, and no, before you go all smart-alec thinking ’bout that bad joke on why the chicken crossed the road (ahem), this is actually a traditional, Indonesian delight whereby the piece of chicken (a thigh, in this case) is marinated, then smashed with a wooden hammer-like apparatus, before deep-frying. Of course, one can argue about more efficient tenderizing method, for the chicken may turn out drier anyway, exposed to the rigorous process of deep-frying. 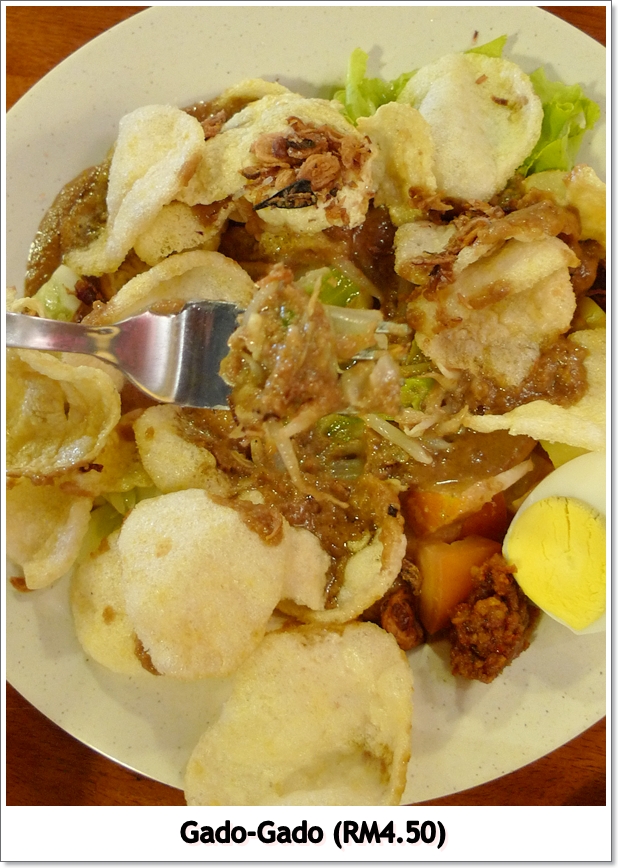 But the authenticity lies in its preparation process, more than the ingredients themselves. Marinated lightly, with some herbs and spices, the piece of chicken did remind us of the average Ayam Goreng served at most Malay ‘warung’, topped with some crispy fritters and served with a dollop of spicy sambal on the side, with blanched kangkung (water convolvulus), fried beancurd (tofu) and and piece of ‘tempe‘ (a fermented soybean cake) to round up the set.

No rice was served with this set, which is a clever business ploy, as I highly doubt you will eat the chicken on its own. A serving of rice is priced at RM1.50/USD0.40, while the Ayam Penyet set is priced at RM7.50/USD2.10. 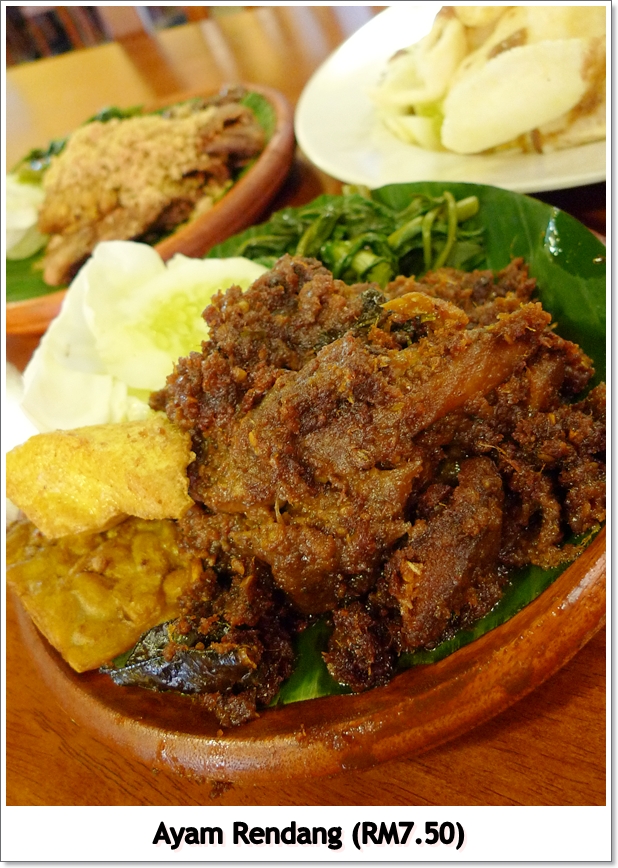 The Gado-gado is a famous Indonesian salad, served with chunky peanut dressing, almost resembling the satay sauce. At Ayam Penyet- AP’s, the ‘gado-gado’ was also garnished with lots of crackers, particularly interesting were the few pieces of kerepek belinja, a type of crackers made from a bitter-ish plant (or tuber? someone enlighten me here). With half a boiled egg, the salad came in a rather measly portion enough for one, albeit priced reasonably at only RM3.50/USD1.

The staff mixed up our order for Daging Rendang, and instead served us with Ayam Rendang, without even an apology after we confronted them about the mistake. So much for customer service, and 5% service charge. Nonetheless, the Ayam Rendang came in a most blazing hot form, so do not push your luck if you’re not in favour of spicy food. It was tastier that the Ayam Penyet, in my personal opinion. 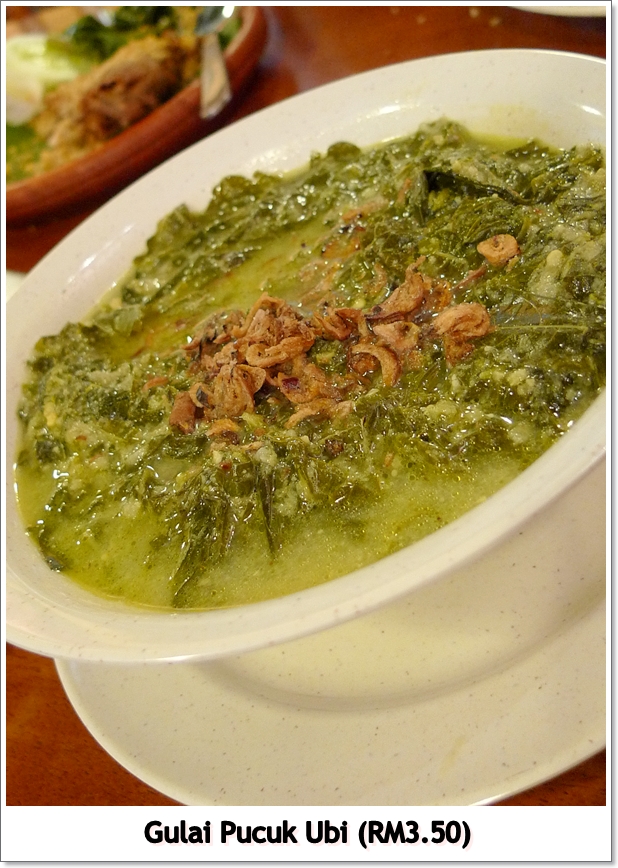 And do NOT look down on the Gulai Pucuk Ubi (Sweet potato leaves cooked in a rich, coconut milk-laden broth with added bird’s eye chillies), for the mild-mannered vegetable dish packed a most fiery punch! Garnished with some fried shallots, the almost creamy, pulp-ish serving of greens may remind one of Palak Paneer, a North Indian specialty of mashed spinach with cottage cheese. At a mere RM3.50/USD1, the serving was enough to be shared. 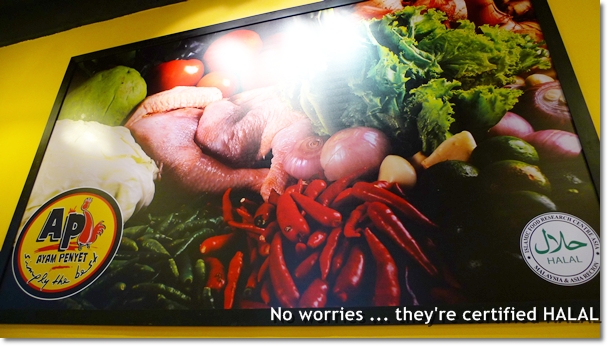 Ayam Penyet – AP is a branch from Klang Valley, with six outlets scattered around. Hop over to their website for the other locations.